Power of Nimitta for Deep Meditation 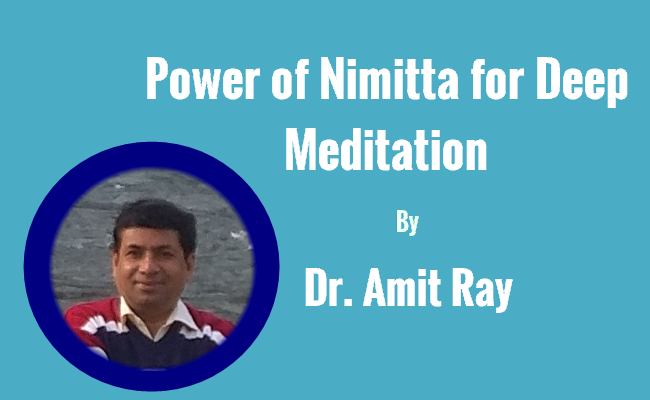 Power of Nimitta for Deep Meditation

Sri Amit Ray tells us the importance of  Nimitta in Meditation for Spiritual Awakening.

The word “nimitta” means “sign”, “direction” or “signal.” Nimitta refers to the mental images, feelings, fragrances, sounds or tests that spontaneously appear when mind is sufficiently relaxed and focused.  Nimitta arises from soul as ego vanishes. It cannot be created or captured by conscious effort or ego.  In meditation nimitta gives you the direction in which to move. Nimitta vary from person to person. Some people perceive it as images and lights. Some people notice it through sensations and feelings. In Deep Om meditation nimitta may arises like a blissful and sweet anahata sound. In Vipassana meditation it may arises peace like a blissful oneness with the cosmos.

Nimitta can be the images like a bright star, a cluster of gems, a chariot wheel, white wispy smoke, black hole, full moon disk, sun’s disk,  globes, jewels, a cloud or a lotus flower. They may appear like little stars or small radiant bursts. It can be a soft or rough touch like that of silk-cotton. It can appear as generally round points of colored light.

It can be a pressure or feelings of blissfulness in the center of your forehead. Nimitta can be a flower, a lighted tree, a lighted swan or a lighted bird.

How Nimiita is Different from Objects of Meditation

For example, Visuddhimagga discusses 40 subjects of  meditation at length. They are required at some specific point in the journey of meditation. Among these 40 subjects the following twelve: body awareness, breathing awareness, feeling awareness, thought awareness, loving kindness, compassion, sympathetic joy, equanimity, infinite space, infinite consciousness, infinite nothingness,  neither perception-nor-non-perception are considered as virtues and auspicious objects.

Similarly, if a person concentrate on the image of a prophet or person who had diseases is considered as an in-auspicious object of meditation, because that concentration may invoke and spread more such diseases in the environment. But if you show deep compassion, prayer and love for a person who is suffering, then it can be the most auspicious meditation.

However, Nimitta is mostly auspicious and virtuous because it arises from the soul and it work as a guide and shows the path that exactly required for you.

There are three types of nimittas based on the stages of the meditation. They are: incremental nimtta, breakthrough nimitta and transformational nimitta. 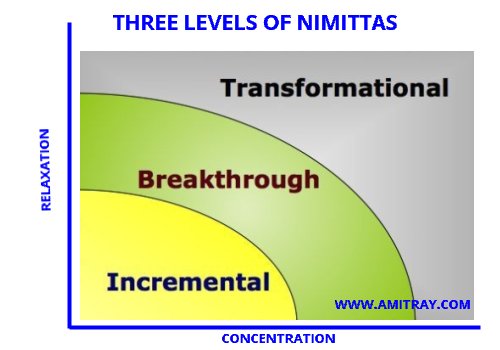 The first type is the incremental nimtta,which refers to the perception of the object at the initial stages of  meditation. Here, the sign is usually short lived and the sign varies frequently. They varies based on type of meditation and duration of meditation. They are not steady, ego can easily visualized and quickly manipulate them. They can be increasingly noisy if you are not focused. They can be unsteady and unclear image or sign. You can develop incremental nimitta through practice.

When the mind reaches a certain degree of concentration and with relaxation the ego diminishes, a clear image or sign called the  breakthrough (uggaha) nimitta arises. This is a meaningful change in the way you do meditation and gives you something demonstrably new and tangible.  There will be meaningful change in your environment and attitude and inner feelings. Meditation will not be just boring repetition of some rituals. It will establish bridge between earthly existence and higher spiritual dimensions. This is a kind of effortless meditation where mind becomes established in its object with awareness, peace and joy.

These are full deep absorptions in higher levels. These nimittas can  transform the DNA and the way you live and work.  Transformational nimitta is exceedingly rare. It requires consistent practice. Through transformational nimitta, you can reach highest levels of compassion, equanimity, morality and motivation. You will develop new visions and inspirations for the humanity.  You will build ever-stronger, trust-based relationships with your people and around the world. Here, you will realize the mysteries beyond the mind.

Now, I will explain nimitta in breath awareness meditation. Notice the in-breaths and out-breaths. Just notice the sensations in the triangular area above the upper lip and top of the nose. You may feel the breath at the rim of the nostrils, or just inside the nose. Focus your attention nowhere else other than the place normally touched by the flow of air. This point is known as the anapana spot or breathing point. Thus in breathing in and out, noticing as air touches the nose or the lip develop air perception mindfulness. Take the rope of mindfulness and the understanding of impermanence to transcend the mind.

If your mind wanders off, just bring it right back to the breath. If it wanders off again, bring it back again. Your all experiences are impermanent in nature. This understanding will lead to detachment and further insights into the deeper realities. You are not required to make any deep effort to know the breathing point, because that very intentional effort is a hindrance because it makes the mind busy. Just relax at the breathing point. It should be an effortless awareness. Nimitta arises when you allow your attention to fall effortlessly on the breathing point like an autumn leaf falling on a lake of still water.

“Nimitta  may appear at the  the breathing point itself when your awareness is centered there. It may appear in your forehead area or in-front of your eyes.” — Amit Ray

It can be images like a cloud, a moon disk, a flower or some pleasant sensations of bliss.  Just notice it, do not intentionally change its shape, size, color or appearance. Do not move your mind from the breath to the nimitta. Just relax at the anapana spot.

How to Identify the False Nimittas

There are two types of nimittas: false nimittas and true nimittas. False nimittas are created by the mind and auto-suggestions and also by the external persons, organizations or environments. You can identify a false nimitta by its impact on your behavior and attitude.  False nimtta makes people dependent on something external techniques or organization. It may create addiction to feelings, sensations and ideologies.  If you are irritated and too much reactive after meditation, it can be the effect of false nimittas.

Nimitta and the Modern Neuroscience

When a neuron fires, it excites or inhibits other neurons. Meditation is the art of balancing the two opposing forces of neural networks —excitation and inhibition.  The effective Nimitta meditation activates the homeostatic forms of neuroplasticity in the brain. Effective meditation requires neuronal firing rates to stay within a certain dynamic range of neural firing.

Meditation on positive nimitta or true nimitta will improve your alertness, awareness, resilience, creativity and equanimity. Your mindset will change from negative mindset to positive mindset and from fixed mindset to growth mindset. You will feel more relaxed, responsive and creative. You will have a deeper understandings about reality, sufferings, impermanence, interconnectedness  and the reality around the world.  You will attract more abundance, more love, more good health and more happiness in your life. You may feel being deeply connected, the harmonious exchange of energy with all that is around you, and the appreciation of beauty of life.

If you are interested for Nimitta and Loving Kindness Meditation of Sri Amit Ray you can register here.  This Skype based meditation session will be held on individual basis, based on mutually agreed date and time.